A Baby Between Them

Book Two of the Return to Summer Island Series 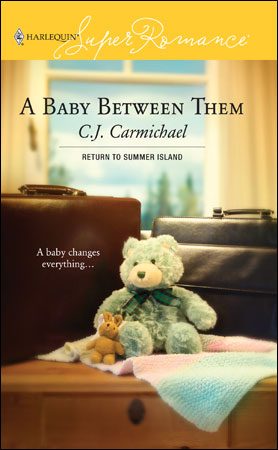 It happened one night...

Aidan Wythe and Rae Cordell had one incredible night together–just before Aidan transferred Rae, his star VP, to Pittsburgh. Now, more than eight months later, Aidan arrives on Summer Island to spend his vacation. But instead of the empty house he’s expecting, Aidan finds Rae. He’s even more shocked to see that she’s pregnant–with his child!

Rae never planned on children. She’s decided on adoption for her baby, but Aidan’s reappearance in her life makes her question that decision.

And Aidan? He has to question his feelings about everything now–the woman, the baby, his future. Whatever happens, things won’t be the same when he and Rae leave the island. 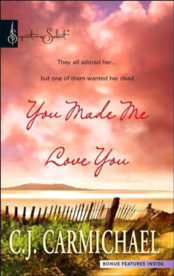 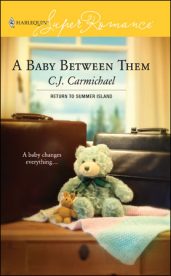 “You didn’t know?” Rae’s voice, usually so strong and confident, gave out in a squeak at the end of her question.

Aidan couldn’t find the words to answer her. He was in shock. Her belly was huge. Enormous. She looked like she was ready to pop at any second. He tore his gaze from her middle and gave the rest of her a closer look. In contrast with her belly, her arms and legs seemed abnormally skinny. Once she’d had curves in all the right places. Now her curves were definitely in all the wrong places.

“Rae, when did this happen?”

She placed her hands—covered in quilted oven mitts--on her hips. “You know damn well when it happened. Eight months ago, in that stupid hotel room in Philadelphia where we were supposed to be preparing our presentation for the Triumph merger.”

He covered his face with one hand. Groaned. Eight months...yes, that took them right back to the night he’d been with her. He’d known then he was making a mistake. But he’d had no idea just what a whopper it would turn out to be.

“Why haven’t I heard about this? You never called.”

Her gaze focused in on him like a laser. “You made it perfectly clear my calls weren’t welcome when you banished me to Pittsburgh.”

“Banished? That was a promotion Rae.” Holding out his hand, he counted off the list with his fingers. “You got more money, more responsibility, a step up the corporate ladder.”

Rae shook her head, releasing more strands of her wild, dark hair from the loose ponytail at her nape. “Sure, Aidan. And you didn’t have to go to work every day and face the woman you’d made the mistake of sleeping with. Be honest and admit the truth. You sent me to Pittsburgh to get rid of me.”

Her words infuriated him and he had to struggle to reply calmly. “Not true.”

“If you weren’t trying to avoid me, then why did you stop making monthly visits to Pittsburgh once I was made divisional VP?”

“I trusted you to handle the job.”

“Oh, really? And the switch from the conference phone calls you used to make to divisional VPs to group e-mails—that must have been another example of your great trust? It wasn’t because you didn’t want to hear the sound of my voice?”

“You’re reading too much into all of that. And forgetting how busy I’ve been with Harrison out of the office so much...”

Since he’d married Justine, Harrison had started working eleven months of the year from here on Summer Island. It had fallen on Aidan—who’d been promoted and given a huge raise—to fill in the gaps.

“Right.” She looked at him scornfully. “You’ve been busy. You haven’t been avoiding face time with the employee you screwed. And when I say ‘screwed,’ of course I’m speaking literally andfiguratively.”

Aidan paced to the far corner of the room. He needed space to think about this. He needed to be calm and rational. But every time he looked at Rae’s enormous belly he felt like he was going to have a panic attack.

Focus on something else for a minute. In front of him, the Kincaid china cabinet was filled with French Provincial serving dishes, tea pots, ornaments. He felt like smashing all of them.

So much for calm and rational.

He turned to face Rae again. “What were you expecting me to do? We shouldn’t have slept together. It was a mistake and we both should have known better.” He let out a huge sigh of exasperation. “Since I was in a position of authority, I recognize I shoulder the majority of the blame.”

She blinked and her head jerked back a little, as if he’d slapped her. What had he said wrong this time? Surely she couldn’t deny that what they’d done had been ill advised, to say the very least.

He hadn’t even asked if she was protected. Which, clearly, she hadn’t been.

“Rae, even if you think I’m the biggest jerk in the world—"

He decided to ignore that. “I still deserved to be told you were pregnant.”

Her answer stunned him. “Because I’m the father.”

“So what? You contributed a sperm. Big deal.” With her hands still covered in protective mitts, she picked up the pan and dumped the loaf of bread sitting on it into the trash. “This smell is making me sick. Or maybe it’s you. I’m not sure.”

Fighting words, again. But throwing insults back and forth wasn’t accomplishing anything. He tried to see her side of the situation. “You’ve been through a lot. Maybe you’ve got reason to be upset with me. But at least you could have told me. Given me a chance.”

“A chance to do what, Aidan? Marry me?” She took off the oven mitts. Tossed them to the counter, like she was issuing some kind of challenge.

“Is that what you want?” he asked quietly.

“Jesus, Aidan!” she exploded again. “I don’t even like you anymore. Why would I want to marry you?”

Okay, that hurt. But why? Wasn’t this exactly the reason he’d sent her away? So their feelings for one another would cool to the point that they’d be able to continue their professional relationship without risk of messy emotional entanglements?

“As the father I have responsibilities. At the very minimum, there will be support payments.” He pictured years and years of tidy monthly bills, and the thought of this obligation, which he was certainly capable of following through on, calmed him somewhat.

Rae crossed to the closest of the windows and opened it, allowing a fresh breeze into the house. Leaning her forehead against the frame, she fixed her attention on the sea.

For a moment, Aidan admired the beauty of the woman. Rae had strong, compelling features, with thick dark hair, rosy cheeks and a lush wide mouth. Since the first day he’d met her, he’d been attracted to her. Then she’d been lean and fit with small, high breasts and a curvy bottom he couldn’t tear his gaze from. Now he was surprised to realize that her new shape held a certain fascination for him, too.

He was so focused on the picture she made, outlined against the bright sunlight from outside, that he almost missed her next words.

He took a moment to process that. “I know you earn a good living and you’re capable of handling everything on your own. But I can’t let you. It isn’t right. I’ll pay my share. And I want to be involved in other ways, too.”

That last bit startled him, as much as it obviously surprised Rae. She turned to him, her dark eyes narrowing skeptically.

When had he decided he wanted to be a father in a real sense? Aidan didn’t know. But it was true. He wasn’t going to walk away from this responsibility, no matter how much he didn’t want it.

She glanced out the window again. “That won’t be necessary. In fact, it won’t even be possible.”

So, he wasn’t good enough for their baby. He wasn’t surprised that she would think that. But what about financial support? Surely she didn’t mean to turn her back on that, as well. “You don’t want anything?”

This should have filled him relief. Instead, Aidan was furious. With her—and with himself. He clenched his fists, and wondered what kind of man felt like shaking a pregnant woman? But that was his urge right now, exactly. He wanted to grab her by the shoulders and make her look at him. He jammed his hands into his pockets, again.

“You’re just saying that to hurt me.”

“I’m saying it because it’s true. You won’t have any responsibilities for me or anyone else.”

“Aidan, listen.” She spoke sharply, her eyes flashing. “You won’t need to look after this baby and neither will I. I’m not keeping it.”

A Baby Between Them is available in the following formats: