More Than a Feeling 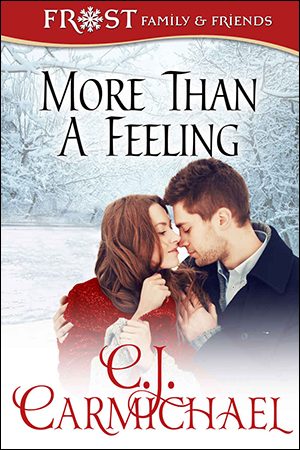 A dangerous twenty-year-old secret is about to be uncovered in the cozy Vermont town of Carol Falls, where not everyone is who they seem to be.

At first meeting, Spencer Frost appears to be a simple farmer who enjoys reading and quoting poetry. In fact he’s a criminal law attorney from Boston on sabbatical at Frost Family Farm. When he meets Robin Redmond, the lovely new sales clerk at the local independent bookstore, he has no idea he’s about to step into a drama to rival even his toughest legal case.

Robin moved to Carol Falls in pursuit of the man who destroyed her sister’s life. Driven to face him—as well as her own guilt about her sister–falling in love with Spencer is not part of her plans. But as they partner up to unravel the twisted truth behind the crime, she discovers love is the strongest weapon of all.

Book 1: What Child Is This, by C. J. Carmichael

Book 4: More Than A Feeling, by C.J. Carmichael 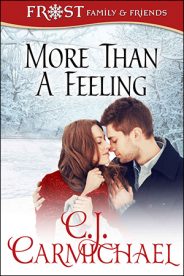 Robin turned on the radio. Loud.

She did not want to think about the magical evening she’d just had. The wagon ride, the stars, the nice Frost family, Spencer whispering poetry in her ear, then looking at her like he wanted to kiss her when they were finally alone.

Worst of all had been the seedling of hope that had awoken in her heart. That she could be happy. Maybe even, one day, loved. And, most of all—normal.

It was like an early April Fool’s joke. She’d been completely taken in. Despite the signs to the contrary—his upper crust accent, his unhardened hands—she’d thought Spencer was a poetry-loving farmer, a modern day Robert Frost.

Only to find out he was an advocate for the sort of criminal who had stolen her family from her. He defended the bad guys, getting them off, twisting the evidence to try and make victims look guilty, fighting for shorter sentences and arguing mitigating circumstances.

He was the champion of men like the one she hated most in the world.

Robin pulled over to the side of the road. She must have been driving in autopilot. Somehow she’d passed the heart of Carol Falls, traveled over the covered bridge and a mile down Red Bridge Avenue to the Fix-It Shop.

It was a narrow, two story wooden building, hemmed in on one side by a pawn shop and a vacant building on the other.

This was not the cute area of Carol Falls where she worked. No, this was where people who couldn’t afford luxuries like ambience or street appeal lived.

She’d already figured out that there was an apartment over the Fix-It Shop where the McGuires lived. The main floor shop was dark now, but at least one lamp glowed in the upper apartment. She could imagine Alistair in an overstuffed chair, feet up on a stool, reading The Brothers Karamazov. Maybe he’d be sipping a cup of tea, or a brandy, with classical music playing softly in the background.

But what about his brother?

The other McGuire, she simply could not imagine. Since she’d arrived in Carol Falls, she hadn’t caught a glimpse of him. Did he ever leave the apartment? She was starting to doubt it. She knew for sure he was there. As the last surviving relative of his victim, she’d been notified when he’d been released from prison and told that he was planning to go live with his brother in Carol Falls.

She wished she could have filed the information under “better off forgotten” and gone on with her life. Not that she’d had much. Since her mother’s death in September, she’d been barely hanging on to her job, let alone doing what she knew she needed to do.

Instead, the idea of Allan McGuire, free to start over when her own family had been destroyed, had festered in her brain, until finally she’d decided she’d never be able to let this thing go until she’d seen him again and made sure that he would never do to another family what he’d done to hers.

She’d had enough counseling over the years to know this wasn’t healthy. Her obsession with the tragedy had stunted her life and cost her her marriage. Brad had been more than patient with her at first, certain that she would eventually learn to let the past go.

But the seeds had been planted early. She’d only been six years old. Twenty-two years later, the garden that should have been her life had been completely overgrown with weeds.

Robin waited, for what seemed like an hour, until finally the lights in the apartment went out. She stayed an extra twenty minutes, checking to make sure that no furtive figure snuck out into the quiet darkness. Only then did she feel free to make her way home.

Find out more about the Frost Family Christmas Series →

More Than a Feeling is available in the following formats: