Book One of the Carrigans of Circle C Series 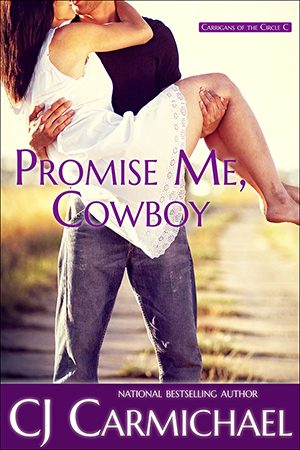 Sage Carrigan never meant to be the other woman. Unfortunately, bronco rider Dawson O’Dell neglected to mention he was married the night he invited her to his bed after they’d both placed first in their rodeo events. When his wife walked in on them – Sage was deeply hurt and humiliated. After an accident in the ring the next day, Sage decides she’s quitting the rodeo–and cowboys—to become a chocolatier in her hometown ranching community, Marietta, Montana.

She’s doing just fine, but then Dawson shows up —five years later, with a little girl in tow. He’s here for the Copper Mountain Rodeo hoping to win big. But he’s also got plans of settling down with his daughter and buying a house—the very same one that Sage has been dreaming about. He says he’s here for her and he’s making lots of promises. But can he keep them? 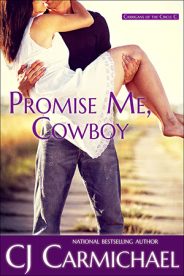 A lot of people believe you can’t keep a secret in a small town, but that simply wasn’t true. Sage Carrigan was only twenty-nine years old and already she had two that would blow the minds of her sisters and her father and the girlfriends who thought they knew every little thing about her.

And one of those secrets was just now stepping into her chocolate shop.

Sage stepped behind the counter, needing something solid to lean on. It was really him, Dawson O’Dell, her biggest secret, her biggest mistake... her biggest weakness.

Right now O’Dell was one of the top ranked cowboys in professional rodeo. She’d met him back in her barrel-racing days, but five years hadn’t changed him much. He still dressed like the bronc-rider he was, in Wrangler jeans and dusty boots, western shirt unbuttoned to the white T shirt beneath. His dark blonde hair was a little too long, and his green eyes a little too astute.

The second his eyes met hers she knew this was no chance encounter.

He walked right up to the counter and gave her a look that made her instantly remember all the things she had once found so irresistible about this man.

He looked at her as if he knew her inside and out. Which he did. Or at least he had. Then his gaze swept the shop, the shelves of attractively packaged chocolate. However you liked it, she had it. Dark chocolate covering silky mint creams, milk chocolate over salt-flecked toffee, chocolate shavings and chocolate mixed with nuts. Bars of dark, milk or white chocolate. Chocolate in the shape of horses, cowboy boots...or the letters from A to Z. And more.

“Quite a departure from barrel-racing.”

“That was kind of the point.” Finally she’d found her voice. And now that the shock of seeing him was settling down, anger began seeping into its place. “If you’re here to buy something—please do it quickly. Otherwise, it would be best if you just left.” She looked pointedly at the door, hoping she’d kept the nerves out of her voice.

He rubbed the side of his face, using his left hand. No wedding ring, she noticed. But then there hadn’t been last time, either.

He gave her a lopsided smile. “Sounds like you’re still a little angry.”

“I’m not angry, O’Dell. Just really not interested in seeing you. Or talking to you. Or even breathing the same air as you.”

His eyebrows went up. “That’s harsh.”

Obviously not harsh enough because he didn’t leave. Instead he wandered to the display of chocolate letters and selected an “S.”

“Five years ago you owed me an apology. Now, you just need to walk out that door and let me go on pretending I never met you.”

He sighed like she was the dolt in the classroom who just didn’t get it. “I did try to apologize. But you left town mighty fast.”

Less than twenty-four hours after she crashed on that second barrel, her father had shown up in Casper, Wyoming and had whisked her home. But there hadbeen time for Dawson to reach her. If he’d wanted to.

“Sage, even if it is a little late, I still want to say it. I was sorry then, and I’m sorry now.”

Damn, if he didn’t look sincere. But she hardened her heart. Facts were facts and how sorry could he be if he’d waited so long to find her?

Keeping her tone artificially sweet, she asked, “What exactly are you sorry for? Would that be for sleeping with me even though you were married?”

“Or for your wife catching me butt naked in your bed and then pointing a rifle in my face?”

His gaze dropped to the counter and he swallowed hard. The words—she’d never spoken them aloud before—hung out there, embarrassing, and true, damn it. All too true.

“Sure sounds bad, when you put it like that.”

“They are the plain and simple facts Now, may I point you in the direction of the door one more time?” She glanced out the window, seeing scores of shoppers out on the street. Would one of you please come in and buy some chocolate? Save me from having to say anything more to this guy?

“I’ll be on my way soon,” he promised. “Let me pay for this first.” He put the “S” on the counter. He’d chosen milk chocolate. She preferred dark.

His eyebrows went up. “That’s a lot of money for one piece of chocolate.”

“It’s premium quality. Made from scratch in-house. I buy the beans myself, directly from Venezuela. But if you want to put it back, go right ahead.”

“No, no, I’ll take it.” He pulled out his wallet and counted out a five and some ones.

“For someone special?” she couldn’t resist asking, after placing the confection in a cute paper bag and tying the handles with some copper ribbon. “Susan, maybe? Sandra? Sonya?”

She was such a fool for thinking, for even a second, that he’d selected it for her. “Here you go.”

As she handed him the bag, she noticed him checking out her fingers. Oh my God, was he looking to see if she was married, too? What about this Savannah girl? The man was incorrigible.

And lucky. She couldn’t believe they hadn’t been interrupted by another customer during all this time.

“O’Dell?” He was looking at her like she was a toy in a catalogue that he couldn’t afford. “Shouldn’t you be leaving now?”

“Yup. Just wanted to say, it was nice to see you, Sage. You’re even prettier than I remembered.”

She couldn’t help softening at those words, and the sincere look in his eyes as he said them. But then she remembered how she’d felt staring down the barrel of that shotgun, and her resolve was back, stronger than ever. “Goodbye, O’Dell.”

On his way out the door, he turned over the “Open” sign in the window.

He gave her a wink and another one of his killer smiles. “Didn’t want anyone walking in on us, did I?”

But she still managed to get the last word. “You mean like last time?”

Prefer audiobooks? Listen to an audio excerpt from Audible:

Find out more about the Carrigans of the Circle C, Copper Mountain Rodeo Series →

Promise Me, Cowboy is available in the following formats: