Book One of the Coffee Creek, Montana Series 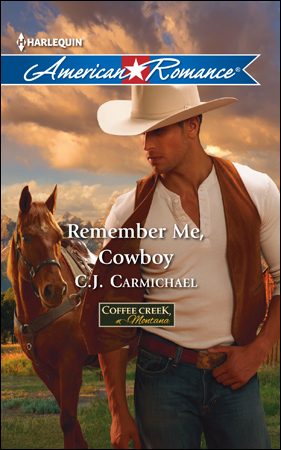 How Can He Not Remember Her?

Corb Lambert is ready to marry Laurel Sheridan. She’s pregnant with his baby—and Corb is the type of guy who will do the right thing. He just wishes that he could remember the passion they shared before a terrible accident wiped his memory clean.

Laurel can’t decide whether to go or stay. Corb is willing to take on his responsibility, but Laurel can’t bear the thought that he doesn’t remember her, especially since she fell for him, hard. She’s got a life in New York—but her baby deserves a father. Could he love her all over again? Or is he just staying in Montana to give her child a name? Laurel has to know now, because one person can’t do all the loving…. 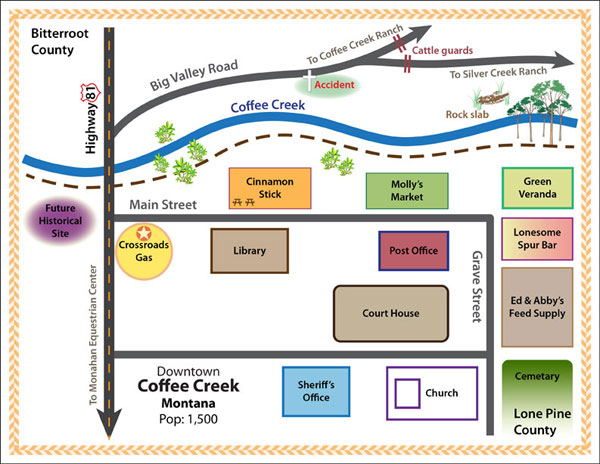 Justice is overdue in the coastal town of Twisted Cedars where two unsolved mysteries lay buried in the past. Read the complete trilogy: 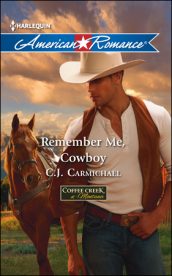 Laurel was making the rounds of the Cinnamon Stick Café with a fresh carafe of coffee when the door chimed. She glanced up to welcome her next customer, but the smile forming on her face froze the minute she saw him.

She’d heard he’d been out of hospital for several weeks now. And had wondered when she was going to see him.

It seemed now was the moment.

He looked good, though his hair had been cropped and she could see a long scar on the side of his head. His dimple flashed when he gave her a smile, though not as deeply as before. Laurel figured he’d lost about fifteen pounds.

He came up to the counter hesitantly, holding his hat politely in hand.

Through the grape-vine, Laurel had kept posted on Corb’s recovery from the accident. He’d been in a coma for forty-eight hours, and in critical condition for several days beyond that. All-in-all he’d been in hospital for almost three weeks, with visits strictly restricted to family members only.

Or so Laurel had been told when she’d called the hospital to ask about him.

She’d wondered if maybe he would phone her when he was finally released, and when he hadn’t, she’d told herself she shouldn’t be surprised. He’d been through a lot physically, and had lost a brother besides. He wouldn’t have time or inclination to think about the woman he’d flirted with, and charmed during the week before his accident.

But now he was here, and clearly his smile and the sparkle in his eyes hadn’t been damaged one bit by his accident. She took a cloth to the clean counter, willing her heart to return to its regular standing rate of sixty-five beats per minute.

“Hello, Sugar. Looks like Coffee Creek got a whole lot sweeter since the last time I was in town.”

She smiled, thinking he was feeding her the same line on purpose. But when she glanced up at him, she saw no spark of recognition in his eyes. “Corb?”

He looked puzzled. Then he frowned. “Have we met before?”

Oh, Lord. She’d heard he had some memory problems after the accident. But she hadn’t been prepared for this. “I’m Winnie’s friend from New York City. Laurel Sheridan. I’m so glad you’re feeling better. I was meaning to--” She stopped, wanting to say so much, yet not knowing how to begin.

He didn’t remember her. How was that possible? He’d touched and kissed the most intimate parts of her. They’d stayed up talking until the wee hours of the morning, sharing their deepest secrets.

She’d told him her entire life story. She hadn’t intended to, normally she was quite reserved, but he’d seemed so genuinely interested in everything about her.

The bells over the door chimed again, a fact Laurel barely registered until Jackson joined them at the counter and tapped Corb on the shoulder.

“You here to flirt? Or order coffee?” He nodded at Laurel. “Hey Laurel. Any word on how Winnie is doing?”

“She’s okay.” Winnie had made her promise not to say a word about the baby. She wanted to wait until she was well enough to return to Coffee Creek and deliver the news to the Lambert family in person.

“Will she be coming back soon?”

“I doubt it. She’s had some health issues and for now, it’s good for her to be around her mom and dad.” She glanced at Corb who was listening to the exchange intently, lines marring his high forehead, and obscuring his charming grin.

“So you’re Winnie’s friend from New York? The one who was travelling down to be her maid of honor?”

“He doesn’t remember much about that week,” Jackson said by way of explanation.

Corb nodded. “Scared me at first. I guess I’m kind of glad I don’t remember the crash.” He swallowed. “But there’s lots of other stuff that’s gone, too. The specialist told me it’s normal, though, so I’m trying not to worry about it.”

Laurel knew she shouldn’t take his loss of memory personally. But it was hard not to feel hurt that he didn’t recall her at all. “Is it possible your memory will come back?”

He shrugged. “They say it could happen--but no guarantees.” He stiffened his spine, and managed another smile as he offered her his hand. “Hard to believe I could forget a woman as beautiful as you. Must have been some knock to the head, huh?”

It was so weird to shake his hand, as if they were strangers making their first acquaintance. Playing along though, she kept her tone light. “Nice to meet you--for the second time. I take it you’re here for coffee. Like to add a couple of cinnamon buns to your order?”

“I’ll take one, Sugar. How about you, Jack--“He turned to confer with his foster brother, but Jackson was already on his way out the door.

“I’ll skip the coffee for now and go put in that order at the feed store.”

“I’ll meet you there,” Corb said. Then leaning over the counter, he added, “Say Laurel, I was wondering if you could give me Winnie’s number at her folks’ place. I’ve been meaning to call her and see how she’s doing. My family’s been treating me like an invalid. Mother put me in the guest room at the main house, and until today, wouldn’t let me even touch the keys to my truck. So I haven’t had much chance to check in on her.”

“Sure.” Laurel wrote the number on an order slip, then tore it off the pad and handed it to him. According to Winnie, none of the other Lamberts had been in touch since the funeral and Olive hadn’t even returned the calls Winnie made to Coffee Creek Ranch. So Laurel was glad to see at least one member of the family willing to reach out to her friend.

“Maybe I should ask for your number, too.” Corb’s eyes glinted with charm as he folded the paper and slipped it into the pocket of his jeans.

Gosh this was weird. He was flirting with her as if he’d never met her before.

“You’ll find me here most of the time,” she answered lightly. “How’s your mother doing?”

The flirting light left Corb’s face. “Not so well. She’s been spending too much time alone in her room. Now that I’m stronger, I’m trying to coax her out, get her working with the horses again. That’s the only thing that’ll cure her, I figure.”

“I can’t imagine your mother on a horse. She looks so fragile.”

Corb laughed. “Looks are deceptive where my mother is concerned. But losing Brock has taken a toll. When Dad died, she didn’t have the luxury of isolated herself with her grief. Us kids were a lot younger then and she had to run the ranch. Now she knows she can leave all that to me and Jackson--though to be honest, it’s been mostly Jackson up until now.”

“I know Cassidy went back to college,” Laurel said. “She stopped in for a visit on her way out of town. I assume B.J. is back on the rodeo circuit, as well?”

“He’s looking good for making the Finals this year, so yeah, he had to get right back into competitions. Mom wasn’t too pleased, she was hoping he’d stick around some. He did hire us a couple extra hands for the ranch before he left, though. I’ll give him that.”

Laurel passed Corb his coffee and bun, and Corb put a ten dollar bill on the counter, refusing change.

He lifted the lid off his coffee and was about to add sugar, when Laurel stopped him.

“I already did that. Two packages.”

He gave her a puzzled smile, then headed out the door.

Find out more about the Coffee Creek, Montana Series →

Remember Me, Cowboy is available in the following formats: