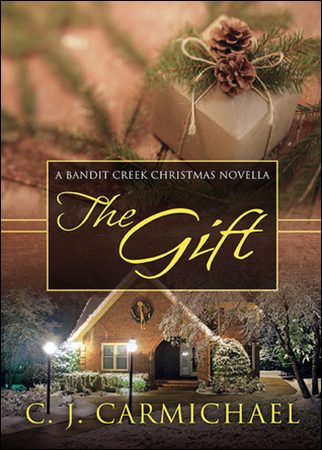 When is the wrong thing, the right thing to do?

What would you do if a child in need showed up at your door on Christmas Eve?

Amy Gold, Bandit Creek’s kindergarten teacher, is not the sort of person to flout the law. Especially since she’s dating the local deputy, Gray Cassidy. But an unexpected Christmas gift is about to change everything—not just Amy’s plans for a traditional Christmas, but her entire future, and Gray’s as well. 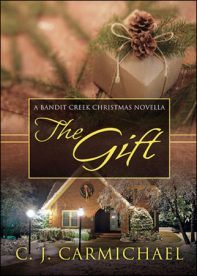 Amy looked up and down the snow-covered street. It was dark now and lights sparkled in most of the homes--even the school, kitty-corner to her house, had been decorated for the holidays. But she could see no cars or people out this evening. All she could see was a set of tiny footprints leading up to her door and ending at the little girl who had plopped down on her porch and was looking up at her hopefully...like an abandoned kitten.

She looked around three, maybe four, dressed in dirty sweats, no jacket, and wearing soft, leather-soled slippers on her feet.

Where had she come from? Why was she so inadequately dressed for the weather?

Slowly the little girl stood. She looked nervous, and Amy wondered if she would run. Maybe she’d made a mistake and knocked on the wrong door?

But the girl didn’t run. Instead, she held out her arms to Amy.

A lump appeared in Amy’s throat. She picked up the girl, who felt light...ephemeral. Maybe she wasn’t real. Had Amy’s longing for a child somehow morphed into a hallucination? Or maybe a lucid dream?

But in that case, surely the child would be perfect and beautiful, and this girl was not. She was dirty and smelly with matted hair and sunken cheeks.

Amy carried her inside and shut the door against the frosty air. Gently she set the girl on the sofa, near the fire. The girl’s wide brown eyes were drawn to the dancing flames, then the Christmas tree. A tiny smile appeared on her face. “Charlie Brown,” she said.

Amy tried to figure out what she was thinking. “The tree?”

“Well, I hope this one is nicer than that.”

No smile. Amy tried again. “My name is Miss Gold.”

The little girl shook her head, as if she disagreed. Amy prodded gently. “What’s your name, honey?”

She shrugged her tiny shoulders, as if to say she didn’t know.

Another shrug. Amy had been kneeling by the sofa. Now she sat back on her heels, unsure what to do. Phone the Sheriff’s office seemed like the logical move. Someone must be missing this girl and desperately worried. Instead, she asked, “Are you hungry?”

A vehement nod was her answer to this.

“Wait here by the fire where it’s warm.” In the kitchen she gathered a glass of milk, a blueberry bran muffin and a banana. She set the tray on the coffee table in front of the sofa. The girl glanced at her for permission, and when she nodded, set to the food as if she were starving.
Given her small size and emaciated face, Amy suspected that was exactly what she was. The food was gone so quickly, Amy was tempted to give her more. But she didn’t want to overdo things.

Maybe a bath should be her next move.

What about that call to the Sheriff?

Eventually, she promised herself. Her instincts were cautioning her to take things slow. She held out her hand, and felt touched when the little girl put out her hand, too. So trusting. She wrapped her fingers around the colder, smaller ones, and led Dora to the bathroom. The little girl eyed the tub warily.

She got the negative shake this time.

Maybe she didn’t know what a bubble bath was. Amy plugged the tub, turned on the water, then added some of the vanilla bubble bath that one of her students had given her for Christmas. Dora’s golden-brown eyes expanded as frothy bubbles began to form in the warm, rising water.

“May I help you out of your clothes?”

This time she nodded.

Amy resisted the urge to hold her nose as she removed the grimy sweatpants and shirt. Then she sucked in a shocked breath. Bruises covered the little girl’s arms, legs and back. “Did you fall and hurt yourself?”

Amy examined one of the purplish green marks on her arm and somehow wasn’t surprised to see the imprint of large fingers. The other bruises were of so many various shades--some darker, some lighter-- it was clear they’d been made at different times.

Amy closed her eyes for a second and took a deep breath. Well so much for the idea of concerned, loving parents searching for their daughter. This child had been, not only criminally neglected, but also abused. This had to be reported. But as a teacher, Amy knew that as soon as she made that call, a process would be set in motion. A process that would include social workers, and doctors, and a whole rash of strangers. She didn’t want to subject Dora to all of that. Certainly not on Christmas Eve.

So, she set aside Dora’s dirty clothing, then helped the little girl into the warm, bubbly water.
She was rewarded with a smile. Hesitant at first, then slowly broadening to the point where dimples emerged in those thin little cheeks.

For the first time Amy could see that Dora was truly a pretty little thing. She let her play with the bubbles for a few minutes, trying not to think about what would happen when Gray arrived. He was a deputy. He would insist that she call the authorities immediately.

Pushing that thought from her mind, Amy took her softest washcloth and the shampoo. That hair was going to be a challenge. Was it possible it had never been properly washed? The tangles were unbelievable. Reluctantly Amy pulled out a pair of scissors.

“Honey, I’m afraid I’m going to have to give you a bit of a haircut. Is that okay?”

Dora frowned as she looked at the scissors, but she didn’t flinch when Amy gently singled out a chunk of her hair. The little girl’s trust in her was amazing, Amy thought, as she worked her way around the girl’s head, removing chunks of hair, trying to leave her with something that would be somewhat presentable. When she was done, she shampooed the rest, and used copious amounts of conditioner.

Later, when the little girl was dry and dressed in a one of Amy’s old T-shirts and a pair of fuzzy socks that went almost to her thighs, Amy was surprised to see that her hair was naturally curly and brilliantly red.

Oh my Lord, she was totally adorable. And she smelled great now, too. She turned the girl so she could see herself in the full-length mirror on the wall and was caught by surprise when Dora threw her arms around her neck in a spontaneous hug.

At that moment, came the sound of the front door opening. And Gray’s cheery voice. “Merry Christmas!”

The Gift is available in the following formats: