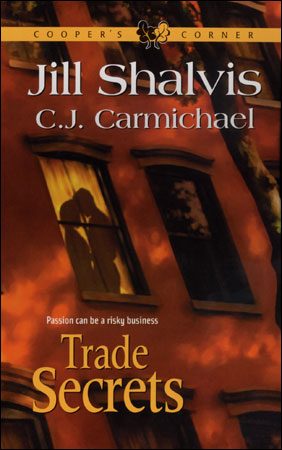 Passion can be a risky business...

In Trade Secrets, C.J. joins with series favorite, Jill Shalvis, to bring readers the intimacy of Cooper’s Corner, with the high stakes of Wall Street. Years ago a group of MBA students at Harvard made a pact–to each become CEO of a Fortune 500 company before they reached forty. Now their friendships, their loves and even their lives are at stake…

Dealing With Annie, by Jill Shalvis

Annie Hughes has become the Martha Stewart of cosmetics. But when DEA agent Ian McCall warns Annie that her company is the target of sabotage–and that she is in danger–she won’t listen. Then Annie disappears. And only Ian can rescue her.

Deal Of A Lifetime, by C.J. Carmichael

Quinn Huntington founded his corporation on loyalty and trust. Yet he agreed to meet Meredith Haydenwhen she approached him with insider information on his competitor. He told himself he was just playing along until he figured out her angle. But if he was honest, he knew his true motive was his passion forMeredith. 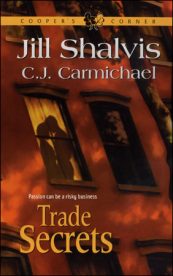 Meredith’s hand trembled as she passed a ten dollar bill to her cab driver. She stumbled a little getting out of her seat, shut the passenger door too hard, then tried to smile an apology.
Oh God, she was so nervous. But she had to stop showing it and now. She was a professional, for heaven’s sake. And this was simply a job, nothing more.

She stared in front of her, seeing nothing but the stone façade of the New York Men’s Athletic Club. Her heart was racing, but not just from nerves. She had to admit a part of her was excited. Ninety percent of the time, her job with Hayden Confidential was spent at a desk. Sure she had to use her brains and sure she’d uncovered some pretty outrageous crimes. But usually from a distance. Thanks to all the high quality surveillance equipment available these days, rarely did she need to get involved on a more personal level. Meeting Quinn Huntington today was an exception.

The uniformed bellhop at the front door directed her to the main floor bar. Automatically Meredith checked her watch. Now it was three minutes past seven. She’d heard Quinn Huntington was often late. Would he keep her waiting tonight? With a deep breath, she squared her shoulders and walked through the open French doors to the bar.

A man in a white dinner jacket sat at a large ebony grand piano. His music set the correct tone for the ambiance of the place with its dark wood paneled walls, thick carpeting and framed oil paintings. Meredith eyed the rich mahogany bar, the elegant tables and comfortably upholstered leather chairs. The scent of cigarettes and cigars was subtle, thanks to an efficient ventilation system.

At a glance, Meredith estimated about twenty people were currently in the bar, less than a quarter of them female. With a recent press clipping of Quinn Huntington fresh in her mind, she scanned the room again. This time her gaze screeched to a stop at a tall, elegantly dressed man, seated at the corner of the bar.
He was smiling faintly and watching the entrance. Watching her. The photos she’d previewed hadn’t done him justice. He was...incredible.

As their glances collided, his eyebrows rose in silent question. She nodded. With stealthy purpose, he left the bar and his drink, heading in her direction.

And all the while his gaze remained locked on her.

Suddenly she felt a tremor of fear, not just nerves. What if he’d met Stacey and knew what she looked like? What if he uncovered her deception right away?

Meredith, who prided herself on control, on self-assurance, on perfection, for the first time felt doubt. Was this plan the best idea? And was she sure she was up for it?

It was too late for doubts. She raised her chin an inch. The game had begun. Besides, she was in a public bar, for God’s sake. What could Quinn Huntington possibly do to her here?

Quinn stopped three feet from her. The sharp calculating glance she’d spied from across the room had disappeared. Now he smiled with lazy charm.

She knew that to hesitate, for even a second, would be fatal to her plan.

He’d gotten her wrong, all wrong. Gazing into the deep blue eyes of the elegant woman in front of him, Quinn wondered how it was possible.

This woman was refined, beautiful, intelligent. Her clothing was impeccable...and expensive. Her posture assured and graceful. Up close he put her age closer to early thirties than early twenties. Which made all the difference, in Quinn’s experience, between women and girls.

When she held out her hand to him, he sandwiched it in a firm hold. Her fingers were warm, dry, steady. Nerves of steel? Or did she have experience selling her employer’s secrets?

She hadn’t been in love with her boss. He’d been wrong about that, too. She was too wise for that old mistake and too calculating to fall into it by accident.

So what was her motive in selling out Chance? Pure financial greed?

Oh, he hoped not. That would be so terribly dull. And this woman intrigued him. He’d expected sugar candy with a sour aftertaste. And he’d discovered a finely blended wine. Maybe even champagne.

She eased her hand out from his. "How did you know my last name? I didn’t give it to you over the phone."

"You know very well I did not."

Her voice thrilled him. Her enunciation so perfect, her tone carefully modulated. The telephone hadn’t done her justice in this area, either.

"I’ve checked up on you, Ms. Prentice. Enough to know you’ve been Chance Maguire’s executive assistant for the past four years." So why turn on him now? Had Chance skipped on this year’s bonus? The clothes she was wearing, alone, would cost more than most executive assistants’ monthly salary. Which led him to believe she had other means of financial support.

Perhaps she’d done this sort of thing before.

"I’ve compiled some research of my own, Mr. Huntington. Based on which, I must confess, I expected you to arrive late."

The woman was bold to risk antagonizing her mark like this. "Very good, Ms. Prentice. But your research was not quite thorough enough. I often keep boring business associates waiting. But never beautiful women."

"I’m afraid I may fall in the former category."

"I don’t share the same concern." He indicated a quiet table in the corner. "Care to join me for a drink?"

She glanced at the bar where he’d been sitting.

"They’ll bring me my glass," he assured her. "I thought you’d appreciate the privacy." He followed her to the table, glad for the opportunity to examine her openly. He saw that while her body was slender, it was also strong, athletic. This intrigued him even more.

"So what will you have, Stacey? A glass of wine?"

"Scotch and water, please," she told the waiter. "Preferably Glenlivet."

She simply would not conform to his expectations. Quinn laid his arms on the table between them and decided on frankness. "You are nothing like what I expected."

She lowered her eyes a fraction, before replying. "While you are exactly as I anticipated."

"You’ve already made an assessment?" For the first time in a long, long while, he realized he cared about the impression he’d made. And feared it wasn’t favorable.

He would have to change that. The waiter brought their drinks, and they made idle chit chat for a few minutes. Though they spoke of nothing important, the conviction that he had to see her again, and soon, only grew stronger.

"Have dinner with me tonight." Suddenly the business between them was the least of his concerns. He wanted to seduce this woman. It wouldn’t be easy. Everything about her--from her expression, to her body language--screamed keep your distance. Why was she like this? So cool and prickly? She wore no wedding band. No rings at all, actually.

"Let’s finish our drink before we discuss dinner." She picked up her glass. Raising it toward him, she offered a toast:

"To success. Yours and mine."

"We are talking about business here?"

She folded her hands on the table. Her long, pale fingers were smooth and neatly manicured. A thick gold bracelet slid below the cuff of her jacket. Aside from her earrings, it was her only jewelry.

"My impression on the phone was that you were serious about my proposal."

"Sadly, I am serious about very few matters."

She pushed back on the table. "If I’m just wasting my time..."

"No." He didn’t want her to leave. "I read the file you sent to my house." She’d used a common courier company.

When he’d quizzed the deliveryman he’d learned nothing. The envelope had been left with security in the lobby.

"Well." She looked as if she expected him to say more, then finally shrugged. On her, the movement seemed very expressive and elegant. "Good."

She’d finished her drink. "So." He tapped her empty glass. "Dinner?"

"I don’t see the need. We can finish this right now."

Perhaps they could. But then he’d never know why a beautiful woman like Stacey Prentice was selling corporate secrets. Or how her body would feel in his arms while they were dancing.

"Dinner first," he insisted. "My place."

"Don’t worry. I don’t intend to torture you with my cooking. I’ll order something. There’s a wonderful Italian restaurant on my block. The chef is used to catering to my whims."

"'Whims' meaning the various women you take home to seduce?"

"Perhaps on occasion. But as you’ve just reminded me, ours is a business association."

The sheen of amusement in her eyes made him think she knew his game and was willing to play it.

"Why don’t I settle the tab, then we can catch a cab?"

He headed for the bar to do just that, but when he glanced back after handing the bartender a fifty, Stacey Prentice was no longer sitting at the table where he’d left her.

Trade Secrets is available in the following formats: