Book One of the Fox & Fisher Detective Agency Series 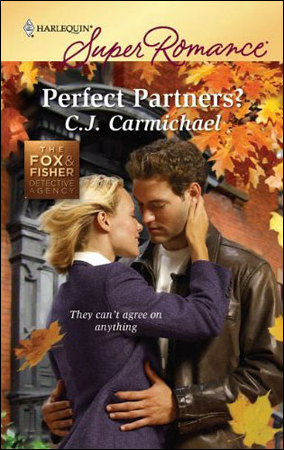 If He Says Black She Says White

Lindsay Fox and Nathan Fisher couldn’t be more different. In fact, she knew after her one-year stint with the NYPD, she’d driven her former partner as crazy as he’d driven her. He was even part of the reason she left the force, although she’d never admit that to him! So she’s more than a little surprised when Nathan answers her ad for a new investigator.

Working together now they discover a delicious chemistry beneath their differences. Could they actually become more than partners? Then they take on the challenge of an unusual case—one that reminds Lindsay of her own painful past. Her instinct is to push Nathan away. But can she take a bigger risk and let him in? 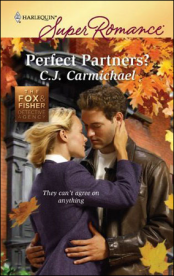 Many hours later Lindsay swirled the ice in her paralyzer and tried to believe it was a coincidence that Nathan Fisher had just walked into her local bar.

He was wearing dark jeans and a cream-colored pullover sweater, thick enough to keep a fisherman warm on a cold day at sea. As she watched, he brushed a hand through his hair, creating a stylish, messy look. Had he done that on purpose? He was scanning the crowd, searching for someone—she didn't need to guess who.

She shrunk into the corner of her booth seat at the back of The Stool Pigeon. This was going to be tough. She had better prepare herself.

Since Kate had explained the story behind Nathan's departure from the NYPD, she'd been battling the urge to call him and offer him the job.

Despite his "by-the-book" mentality, Nathan was an excellent investigator and quick on his feet, too. She'd be lucky to have him on her team, the only hitch being that she wasn't willing to take him—or anyone—on as partner.

Lindsay took a sip of her drink, then lifted her head for a second look. The pub was about half-full tonight. Several men were seated at the bar. The booth across from her's was empty, but an elderly couple sat in the booth ahead of that one. Four tables were lined up along the front window. A group of twenty-somethings had pulled two of the tables together. They were mostly guys, with a couple of dolled-up girls along as side-kicks.

Though she didn't know all their names, Lindsay recognized most of the faces. The local joint was tired, and small, but the clientele were loyal.

Or perhaps, like her, they simply lived nearby. It was nice not to worry about hailing a cab when you were finished drinking for the night.

Lindsay sighed with dramatic resignation as Nathan slid into the bench seat opposite from her. From their days of working together, she knew Nathan was into health food, a border-line vegetarian. This was the last sort of establishment he would choose to visit.

Of course he wasn't here for the food.

The guy had definitely done his research if he knew enough to find her here. That fact, alone, was enough to make her want to hire him.

"What did you have for dinner?" His gaze dropped to the dish she'd pushed aside a few minutes ago. "It must have been delicious. That plate is almost clean enough to put back on the shelf."

"Chicken pot pie. You wouldn't like it. It's about a thousand calories, most of them saturated fat."

Nathan flagged the server. "I'll have what she had. Plus a mineral water if you have any."

Wendy Pigeon, who co-owned the place with her husband, Mark, looked at him in disbelief, then back at Lindsay. "You have a date?"

"Definitely not. Nathan used to work with me when I was a cop. Don't bother remembering his name. He won't be back."

Wendy removed Lindsay's empty dish and replaced it with a slice of coconut cream pie. "Want another paralyzer?"

Lindsay took the last slurp from her glass, then nodded.

Once Wendy had returned to the kitchen, Nathan said, "You still drink those things?"

"Why not? They're a great source of calcium."

"If you want calcium, you should try soy milk. Those things are loaded with alcohol, sugar, fat and caffeine."

She smirked. "That's why I love them."

He shook his head. "The way you eat amazes me, Fox."

"Whatever." She shrugged and proceeded to enjoy her first taste of pie. At least she tried.

Nathan was looking at her steadily, his arms folded on the table, his body leaning forward. Close up like this, she couldn't help but be aware of his broad shoulders, and solid muscles.

"We worked together for a year and I still don't know anything about your personal life." The power in his gaze lessened, was replaced with curiosity. "You never talked about family or friends. Never mentioned a boyfriend--ex, or otherwise."

"I'm not much for chitchat. Especially at work." She took another bite of the pie, trying again to appreciate the rich flavor and creamy texture.

"No. Clearly you have your friends for that."

She grimaced at his reference to the fact that she'd been eating—worse yet, drinking—alone. "Hey, these people are my friends. Wendy and Mark." She waved her pastry and custard-covered fork in the direction of the bar. "Those losers watching the baseball game."

"Right. Bosom-buddies, I can tell." He leaned into his seat and shook his head at her. "So how were the rest of the job interviews this afternoon? Did you hire anyone?"

She considered lying. But he'd find out soon enough. "No," she admitted. "But we're running the ad again this week. I'm sure someone suitable will turn up."

At least she could hope. She'd tried so hard to find potential in the two other applicants she'd met this afternoon. But one had been a disorganized mess, the other curt to the point of rudeness. Even good-hearted Nadine had agreed that neither one of them could possibly work.

"How about a one-month trial period?" Nathan suggested. "If either one of us isn't happy, we'll call it a learning experience and move on."

It was a tempting offer. "You still talking about a partnership?"

She shook her head, reluctantly. "I've gotten used to working on my own." She took the last bite of pie, then dug into her leather bag for the envelope he'd given her earlier. "You might as well take this back."

"The case didn't interest you?"

"Hell, yes, it interested me. But it's yours. I have no idea how you landed such a plum assignment, but with contacts like yours, why do you need me? You can set up your own business simply enough."

"I'm not interesting in working alone. You're already established and I think our skills are complementary. Why not team up and make the most of them?"

He was making a strong case. But so far neither one of them had mentioned the one other reason partnering up again might not be such a great idea. She studied the depths of his warm, brown eyes, and wondered if he'd forgotten about that night.

If he had, it was probably for the best.

"Why didn't you tell me the real reason you left the force?"

His eyes became guarded, and his mouth tightened. "I figured you'd have read the papers."

"I don't make it past the front page very often. But I happened to be talking to Kate Cooper today and she filled me in. Those hypocrites. I can't believe they hung you out to dry."

"Politics. Lieutenant Rock said not to take it personally." His laugh was short, and hard.

"And what did you say to that?"

He raised his eyebrows at the interruption. "But that day I did." He allowed a small smile. "Felt damn good, too."

"Maybe you're human after all, Fisher."

Wendy came out of the kitchen with a pot pie for Nathan. She always wore her dark hair tied back, but one strand usually defied orders and needed to be tucked behind her ear at periodic intervals. Wendy did this now as she hesitated at their table.

Lindsay got the hint, and reluctantly introduced Nathan as her ex-partner.

"I recognize you," Wendy said. "Your picture was in the paper. You're the cop who shot that rich lawyer's kid."

Resignation, pain, anger...Lindsay wasn't sure which emotion flashed over Nathan's face, in the brief instant before he was able to compose himself.

"The press hung you out to dry, but we weren't fooled." She glanced at Mark, who was drying glasses behind the bar, but keeping an eye on them at the same time. "That kid deserved every ounce of trouble you gave him, and then some. So how did things end up for you? You get fired?"

"No, actually, my name was cleared last week. Then I quit."

"Yeah? I didn't see anything about that in the paper."

"The story ran this Wednesday. A short article near the end of the section. I'm not surprised you missed it."

Lindsay was appalled. "So they tar and feather you in the headlines, then exonerate you in the back pages? That stinks."

"Hang on," Wendy said. "I'm bringing you another mineral water. On the house."

Lindsay smiled as she watched Wendy hurry back to the bar. "You sure won her over."

Nathan poked his dinner with his fork, then lifted his gaze. "More importantly—have I won you over?"

Lindsay hesitated. Despite her reservations, he was wearing her down. "I'll think about it," she finally allowed.

"Think fast," he said. "This is a time limited offer."

Perfect Partners? is available in the following formats: