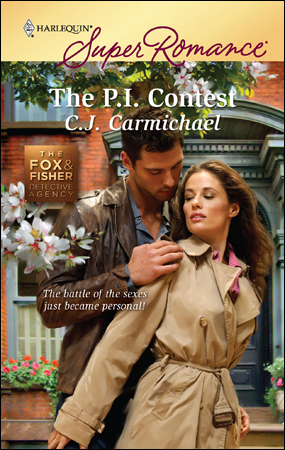 They don't want the same things...only the same job

Kate Cooper cut all ties to her NYPD precinct and dumped her cheating fiancé.

Jay Savage has gained custody of his teenage nephew and needs a stable job yesterday.

When both are offered the only available position at the Fox & Fisher Detective Agency, the obvious solution is to pit seasoned pro against amateur sleuth. And may the best investigator win. But what happens when this professional competition gets personal? There’s no denying the attraction between these adversaries, but they have different dreams for the future. There’s more on the line than a simple career change. In this contest, they’re playing for the heart. 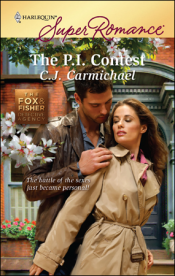 When Kate's alarm went off the following morning, every muscle in her body thought getting out of bed was a bad idea. She got up anyway. Today was the day she was going to end this charade of a competition between her and Jay Savage.

Once she'd had her shower she felt better. Facing her reflection as she dried her long curls into glossy submission, she thought with anticipation about the day ahead. It was always fun to get out of the city for a while, even in the winter and she was looking forward to the drive to Liberty Lake.

She was also looking forward to seeing Jay Savage's face when she told him she had a sample of James Morgan's DNA at the lab for testing.

Kate took a vitamin pill with her orange juice, then loaded her leather bag with a packet of tissues, throat lozenges, hand disinfectant, and pain tablets, just so she would be prepared.

A delay on the subway had her arriving at the car agency fifteen minutes later than she'd planned. She pushed through the glass door with one hand, while at the same time searching her bag for her notebook which contained her reservation confirmation number.

Her hand froze in the purse. By now she knew that voice all too well. One look confirmed it. Jay Savage was dangling a set of rental keys in front of her. The man looked hale and hearty, in a sheepskin lined leather jacket ideal for a day in the country. But he couldn't possibly be headed the same place she was.

"You aren't planning to go to Liberty Lake by any chance?" he asked.

He was. How had he managed to trump her again? "Obviously you weren't as preoccupied with your nephew's problems as I thought."

His pleased smile waned. "I'm doing everything I can to help Eric. And that includes finding a new career."

Again, she felt that pinprick of guilt, knowing that he needed this job not only for himself, but for his nephew, too.

He could find something else, she reminded herself. This is my job. Lindsay promised it to me, first.

Trying to disguise her chagrin, she shrugged. "Great. Well, if you'll excuse me, I have a car to pick up." She tried to step around him to the counter, but he touched her arm.

"It doesn't make sense for us to both rent a car and drive all that way. Why don't I just fill you in when I return?"

"Good idea. Only I'll fill you in when I return." She tried again to get around him, but once more he blocked her.

She sighed. "All right."

She hesitated, torn between his practical proposition and her personal preference to make the trip alone. Maybe, if she got to Liberty Lake first, she could still scoop him on the DNA sample.

Brilliant idea, Kate. What are you now? A rally driver? Much as she hated to admit it, his idea was the most logical.

"Okay, fine," she said. "We'll take the same car. But come back to the counter. I want my name listed in the contract as one of the drivers. And I'm taking the first shift behind the wheel."

Kate didn't look well, but Jay hesitated to say anything. He didn't often run across people with a stronger competitive urge than his, but he suspected Kate fell in that category. She'd sooner expire from exhaustion than admit she wasn't up to driving.

Not that he felt unsafe. She was keeping her attention on the road and maintaining a reasonable speed. But her face was flushed and she was going through throat drops like candy.

"How's the gas?" he asked, thinking if they stopped at a station, he'd be able to suggest it was his turn to drive.

Damn compact cars. They should have rented a gas-guzzling SUV. Jay gazed out the window at the forested hills sprawled on either side of the highway. They'd left urban life behind about an hour ago. According to his GPS they still had almost two hours to go.

Kate reached for the cup holder and took a swig of the orange juice she'd brought along for the trip. Then she popped another throat drop.

"Are you sure you're feeling okay?"

She didn't look fine. A sheen of sweat had formed on her brow. "Well, I'm sure you wouldn't risk our lives by driving when you knew you weren't up to it."

She glared at him, but otherwise made no reply.

Interesting woman. He wondered if she would ever reveal her softer side to him. Maybe she didn't have one. But then he supposed if you wanted to work for the NYPD, you had to be tough.

She didn't look it, though, and maybe that was why she adopted an extra edge when she was working. In profile her features were delicate, and her hands on the steering wheel were fine-boned and elegant, despite the closely cropped fingernails that spoke to her practical nature. She was a very thin woman, especially in her upper body, with a narrow ribcage and high, small breasts. He'd bet she was hot in a bikini. And even hotter without one.

"You've got to stop looking at me like that."

Her glare made him smile. "How did you know how I was looking at you?" He could have sworn she was concentrating on the road.

"I've worked with male partners ever since I graduated from the Academy. Trust me, I know."

"Is that why you're so serious around me? Are you afraid I'll hit on you?"

The direct challenge caught him by surprise. He found himself thinking it over. Did he want to? His body immediately reacted to the idea, which was an answer he wasn't about to share with Kate.

"You're a very attractive woman--"

"Oh, forget it. I was just yanking your chain. The reason I'm serious around you, is because whenever you see me, I'm at work, and I take my work very seriously. It's why I'm eventually going to win this competition and get this job."

"If this guy at Liberty Lake turns out to be our man, you won't win. We'll be tied."

"Maybe they'll give us a second case to work on."

For a moment he thought she was going to explode. Then he realized she was laughing, and he joined in. Enjoying the release of tension, Jay confided, "I'm serious about my work, too. Believe me, you wouldn't want to fly with a pilot who wasn't."

She flashed her gray-green eyes in his direction, her gaze curious. "How old were you when you decided you wanted to fly for a living?"

"Oh, I was young. Like a lot of kids, I was fascinated by planes. When I was about six we lived very close to the airport. I used to hike to a field beside the flight path. I'd lie in the grass and watch the planes soar over my head."

He used to wonder where all the people were going. One day, he promised himself, he'd go places, too. And not just as a passenger.

"Your Mom let you do that by yourself?"

"She wasn't what you'd call a ‘hands-on' kind of parent. She had a lot on her mind. Most of the time I had my kid sister with me. She liked planes, too."

Until she was older. Then she'd started liking boys. And alcohol. And, for a brief period of time, drugs. For years he'd tried to figure out what he could have done to help Tracy turn out differently. But he'd never found any answers. Which didn't bode well for Eric, he was afraid.

"What about your dad?"

"He was with the army. The year Tracy was born he was killed in Nicaragua."

Maybe life had been good before then. Jay had no way of knowing for sure, though there were photos that suggested his mother had once been, not only kind and loving, but also sober.

"That must have been tough."

"We survived." He had anyway. His mother had died, well before her time. And now Tracy was gone, too. They had both died from overdoses of the substances they were addicted to. And he had stood helplessly on the sidelines watching it happen.

Now his nephew faced the same dangers. Drugs or gangs. Either one could kill him. But how could he convince the fourteen-year-old that he was on the wrong path?

He twisted slightly in his seat. Time was ticking away, along with the miles. Since they'd started talking, Kate didn't seem to be reaching for as many of her cough candies. Maybe the conversation was distracting her. Or perhaps the little white pill she'd swallowed earlier was finally taking effect.

At any rate, he'd rather chat than sit in silence and stew about his problems. "What about you? Where did you grow up?"

"In Manhattan. The Upper East Side. My parents both taught at State University.

"Any brothers and sister?"

She gave him a dour look. "My parents were in their forties when I was born, and not about to make the same mistake twice. Dad got snipped before I was even born."

"I hear it's a simple operation, as surgeries go."

She seemed surprised he had said that. "Out of curiosity... how would you know?"

He shrugged. For years he'd been toying with the idea of getting a vasectomy. Unplanned pregnancy was a sort of theme with his family. First his mother, then his sister. He was always very careful with birth control, but it would be nice to know that he was one hundred percent safe.

"You don't want to have kids?" she pressed.

"No." He'd spent his childhood raising his sister. Now he had Eric to worry about. "Do you?"

Her answer surprised the hell out of him.

The P.I. Contest is available in the following formats: