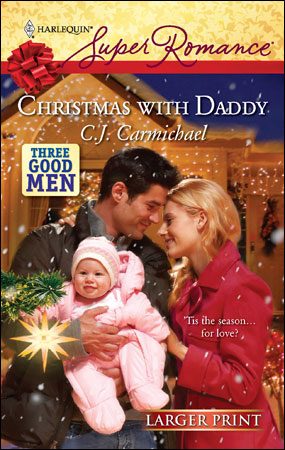 Detective Nick Gray loves his baby daughter, Mandy. But he’s used to solving crimes—not changing diapers! So when he has sudden custody of Mandy, Nick is totally out of his element. Luckily his neighbor, Bridget Humphrey, is here to lend a hand.

Bridget’s had feelings for Nick forever, but she’s nothing like the glamorous women he dates. Then a funny thing happens. As they care for Mandy together, and as Bridget uses her skills to help him solve a case, turns out she and Nick have a lot in common. In fact, their relationship could get serious. But is this fun-loving bachelor a candidate for happy ever after?

In the season of miracles, anything can happen! 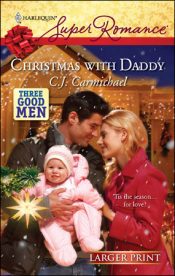 Nick opened his eyes. Was it his imagination or could he smell coffee? He tried to roll over, but couldn’t.

He was on a couch. Bridget’s couch.

He checked his watch. It was past eight. Eight? What had happened to Mandy?

He pushed his body up, planted his feet on the floor. He was halfway to the spare room when Bridget’s voice stopped him.

He peeked round the corner into the kitchen. Bridget was putting a tray into the oven. Usually she wore loose-fitting skirts and long sweaters, but this morning she was dressed in yoga pants and a long sleeved shirt that clung to her rounded breasts. He remembered their kiss and felt instantly turned on.

Coffee. He needed coffee. He went to the pot on the counter. “Mind if I help myself?”

He filled a mug sitting next to the pot, then, noticing her mug was half-empty, topped it up, too. “What time was Mandy up in the night? I’m sorry I didn’t hear her.” He felt badly that Bridget’s sleep had been disturbed, but God did it feel good to get a solid night of sleep himself. Even if it was on a couch.

“She hasn’t made a peep since we tucked her in at nine.”

He couldn’t believe it. “She hasn’t slept through the night once since Jessica left.”

“Maybe she finally reached the point of exhaustion.”

“She wasn’t the only one.” He tried to remember when he’d fallen asleep. It must have been during the movie. Shortly after that kiss.

The kiss had been remarkable. Way better than he could have imagined. But how did Bridget feel about it? She didn’t seem any different. At least she wasn’t angry. But maybe he should apologize anyway.

“Look, I’m sorry about last night. Falling asleep on the couch. That was pretty rude.”

“And before that. Kissing you.” Her cheeks turned pink and for some reason he found that cute. “I made a game out of it, and I shouldn’t have. You’re too nice of a person.”

The pink turned to red. Bridget turned her back on him as she reached for a basket from the cupboard. “It’s okay,” she said, still not looking at him. “Don’t worry about it.”

“All right.” That hadn’t gone over well, he suspected, but not much he could do about it now, without belaboring the point. Nick took his coffee to the kitchen table and found the Sunday paper rolled up in front of him. He slipped off the elastic, then remembered his manners.

“Can I help with anything?”

Bridget was now cutting fruit. “No thanks.”

“You’re not going to all this trouble for me, I hope. I don’t usually eat much breakfast.”

“Okay, then.” He opened the paper and sipped the coffee. After an awkward few minutes had passed, he began to read aloud a few of the news items and Bridget made the occasional comment.

He was just finished with the paper when the alarm on the stove cut him off. Bridget removed a tray of muffins. She tipped them into a basket, then placed it on the table along with a bowl of fruit salad.

“I know you don’t eat much for breakfast,” she said as she joined him at the table, “but if you change your mind, feel free to help yourself.”

He gave her a sheepish grin and went for a muffin. “They do smell good.”

They tasted even better. When he was done he sat back in his chair and tried to remember the last time he’d felt this good. “Thanks for letting us crash for the night, Bridge. We should settle up for the week. I’ll pay you double-time for yesterday and last night—"

She shook her head. “I’ll charge you for the regular hours. But Saturday was a favor. And I won’t take money for last night. I did nothing, Nick. Mandy slept the entire time.”

“Well, you can’t. I don’t work weekends. It’s a firm policy with me.” She picked up the newspaper. “I take it there wasn’t anything in here about Tara?”

“Not a word. I might phone in and check if there were any developments over night.”

Bridget left the room to go to the washroom and he took the opportunity to call. When she returned with her hair in a ponytail he answered the silent question on her face. “Nothing new.”

“I’m not sure whether to be disappointed or glad.”

He knew what she meant.

“What’s your next step?”

He shook his head wearily. “Go back to the beginning and make sure we haven’t missed anything. Interview her classmates again—though I don’t expect it will do any good.”

“Well—" He hated to admit it, but—“I think you were right about Tara being a misfit. The kids on that list of her parents aren’t friends. Reading between the lines, I’d guess that some of them spent time with her because of parental pressure. You know, the parents are friends so they expect the kids to feel the same way about each other.”

Something in her voice caught his attention. “You say that like you’ve had some experience.”

“Never mind about me. Tell me more about Tara.”

“That’s just it. There is no more. If Tara isn’t with a friend, then where the hell is she? Let’s say she was angry at her folks and left on impulse. Where would a kid like her go?”

“Tara’s naïve, not stupid. I can’t see her leaving home unless she had a plan.”

“So she’s not wandering the streets?”

Was he crazy to believe her? “I hope you’re right about that.”

“Even if I am, I don’t think it’s necessarily good news. Tara would only go with someone she trusted. But Nick—what if she trusted the wrong person?”

He tried to wrap his mind around what she was saying. “We didn’t find any evidence of an on-line predator.”

“So it has to be someone she knows.”

“We’ve already established she was a loner.”

“Yes, which would make her an easy target for an older, more experienced man.”

Nick swore as he thought about a case his brother had been involved with last year. Matt’s son’s soccer coach had been accused of sexual interference with a minor. The case had been complicated and ugly and an innocent young girl had suffered terribly.

It was conceivable that something similar had happened to Tara. “Tara had several male teachers. And a swimming instructor,” he remembered. “I’ll make a point of interviewing them as soon as possible.”

“The man could even be a family friend,” Bridget said. “Someone her parents trust too much to ever suspect.”

“I’ll get a list of everyone who has visited the house in the past couple months.” It was a long shot, but at least gave him something to work on.

“It’s worth a try. Nick, something else I think we should try...”

“...I know this is going to sound crazy to you, but if you could give me a list of names and birth dates of these men, I might be able to help you focus your investigation on a few individuals.”

“I’m a cop, okay? Just because I humored you and discussed your theories, doesn’t mean I’m suddenly a big believer here.”

“Humored me?” Bridget flung her head higher and narrowed her eyes. “I thought we were having a productive conversation here. I thought I was helping.”

“Bridget, this is what I’m trained to do, okay? Like it or not, this is my case. Not yours.”

“Fine. Stand on your pride. Don’t worry about closing doors when you could be helping Tara.”

She was pushing his buttons now. As if he wouldn’t do anything in the realm of the possible, to find that girl. “What you’re asking is impossible. The Hartford Police Department doesn’t have ‘take a friend to work’ day.”

“I didn’t say I had to meet these people. I just want names and dates of birth.”

“Bridget, you’ll be wasting your time...”

“I helped one of my clients figure out which of his employees was stealing from him. And I don’t want to tell you how many married men and women have found out their spouse was cheating—"

“Okay.” He held up his hand like a traffic cop. He didn’t need to hear all this. He had no faith in numerology, but in his line of work he’d run across some people who were born with a natural intuitiveness and he wouldn’t be surprised if Bridget was one of them.

She nodded, and an uneasy silence settled over the room. It didn’t last long, though. A familiar baby’s cry tore Nick’s thoughts from the case back to his daughter.

Mandy was awake. And it sounded like she wanted everyone on the block to know it.

Christmas With Daddy is available in the following formats: