The Dad Next Door

Book One of the Three Good Men Series 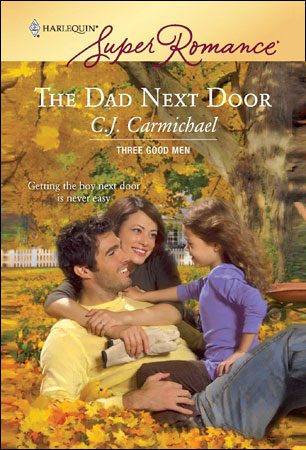 His daughter needs her mother. And Gavin Gray will do anything for Tory—even reunite with the woman who abandoned them. That’s the only reason they’ve moved to Squam Lake, his ex-wife’s last known address. Now it’s a waiting game.

That game has suddenly gotten more complicated. Because of Allison Bennett, the next-door neighbor he never expected to fall in love with. Just as their future looks promising, his ex-wife returns with a past that haunts them all. 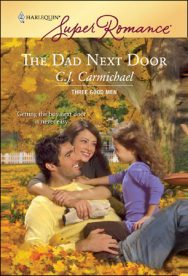 While the owner of the hardware store mixed their custom paint order, Allison wandered up and down the aisles, with Gavin and Tory trailing behind. She noticed a light fixture that would work well in the main bathroom. “What do you think of this, Gavin?”

She wrote down the cost and product number in her notebook.

It was fun shopping with Gavin and his daughter. Just as it had been fun to drive downtown with them in the red station wagon. She felt a bit like she was playing at the role of wife and mother and the fit was not that bad. Not bad at all.

“Dad, can I look at the toy section?”

“Sure, squirt. I’ll come with you.” Gavin gave Allison a warm smile. “Holler if you come up with any other ways to spend my money, okay?”

“You can count on that.” Warmth spread through her as she turned up the next aisle. Here were faucets and sinks and she made note of several that would work with her new plans.

Ever since Gavin had almost kissed her in the living room this morning, her mood had been spiraling upward. Maybe it was too soon after her break-up with Tyler, but meeting the right guy wasn’t something you could schedule. She was free. Gavin was free. Why shouldn’t they—

She rounded a corner and almost walked into her father. “Hi, Dad. What are you doing here?”

“My reading lamp burned out last night.” Her father peered at the array of light bulbs on the shelves in front of him. “Can you tell which of these is a tri-light? I should have bought my damn glasses with me.”

Allison scanned the selection, then pulled out the one he wanted.

“Thanks, Allie.” He squinted at her. “What are you up to, today? You look good. Happy.” He snapped his fingers. “Let me guess. You and Tyler—"

“There’s been no change with me and Tyler. I’m here with my new client. Buying paint.”

“It’s the new neighbor I was telling you about, Dad.” Just on cue, Gavin appeared, obviously looking for her.

“Well, how much poorer am I now?” he asked, coming up behind her, touching her elbow.

“Gavin Gray, this is my father, Seth Bennett. Dad this is my new neighbor.”

The men took stock of one another and Allison could tell her father was impressed. When Gavin turned away for a second, to call for his daughter, her dad gave her a wink and a nod of approval.

She felt a little embarrassed. Her dad really was the most incorrigible matchmaker—she was almost certain Gavin had seen the wink, too. But at least her father wouldn’t keep harping about Tyler anymore.

Then Tory came running toward them and everything changed. At the first sight of the little girl, her dad paled.

She heard him swear under his breath. Her father never swore.

“Dad, this is Gavin’s daughter, Tory. She’s just started grade one this year.”

“Good God. What’s going on here?” Her father poked his index finger at Gavin’s chest. “Who are you, really?”

“Dad.” Allison was mortified. She’d told her father that the new neighbor had a child. Unless it was the resemblance to Marianne that had him spooked?

She grabbed his arm and led him away, before he had a chance to upset the little girl further. “What’s the matter with you?”

“I know. She looks like Marianne McLaughlin. That’s because Marianne was her mother.”

Her Dad’s face grew really pale then. “Is that true? But Marianne isn’t married.”

“She and Gavin never made their relationship legal. But Tory is their daughter.” She considered explaining about Samantha, but this wasn’t the time for that. “Marianne deserted them, Dad. Gavin and Tory have moved to Squam Lake hoping for a fresh start.”

Her father gaped at her. It was a lot to take in, she had to admit.

“That girl is Marianne’s daughter?”

“Yes. But the only parent she really knows is Gavin. Marianne deserted her when she was only one-year-old.” She emphasized the age, wanting her father, finally, to understand the sort of person Marianne really was.

Her dad ran a hand over his face, as if wanting to block the truth of what she was saying. “Poor Marianne,” he said softly.

But he didn’t answer her. Frown lines settled heavily on his face as he thought about all she’d told him. “This Gavin Gray fellow. He’s more to you than just your neighbor and new client, isn’t he?”

“You can’t kid a kidder. I know what I saw when the two of you looked at each other.”

“Well...maybe. But why not? You seemed really anxious for me to find someone new the other day at dinner.”

“I thought he made a good first impression.” Until his daughter appeared on the scene.

“This man isn’t looking for a fresh start in Squam Lake.”

“Bull.” Her father swore again. “Things may be all lovely-dovey now, but I suggest you think about what’s going to happen when Gavin finds Marianne.”

She thought about the dratted e-mail and wished she’d just deleted it. “I imagine they’ll talk about their daughter. Gavin wants her mother to be part of Tory’s life.”

“Maybe he wants more than that. Stay out of this, Allison. You don’t want to be the woman who comes between and a man and the mother of his child.”

The Dad Next Door is available in the following formats: