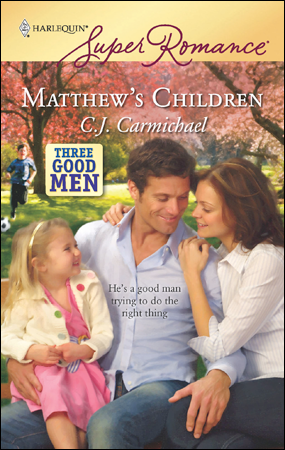 Did you hear about Matt and Jane?

The rumor at their law firm claims that Jane Prentice is the reason for Matthew Gray’s divorce. Matt only wishes it were true. Ever since his marriae ended, he’s put his social life on hold to beome a better father to his kids. Now he’s ready for more, but Jane wants nothing to do with him.

Yet as they work together on a tough case, it becomes harder and harder for her to keep her distance. When she finds herself falling for him, Jane realizes she has to tell Matt the truth. And their relationship could be over before it truly begins once he learns her secret…. 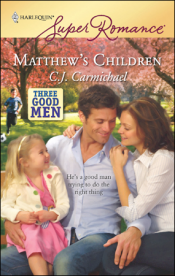 Sully’s Tavern was a half flight of stairs below street level, just off Bushnell Park, and though it was a favorite haunt of trial lawyers, Jane hadn’t been there for over a year. She felt Matthew’s hand at the small of her back as she descended into the familiar, dimly-lit haven. Matt guided her to one of the booths and her black skirt slid smoothly over the leather seat.

The music playing in the background was too subtle for her to place. She glanced around. Less than half the seats around them were occupied. She tented her hands on the clean, cool tabletop and waited until Matt was seated, too.

In the past they’d frequented Sully’s at the end of the work week. A bunch of them would descend on the place from Brandstrom and Norton--not just the partners, but all the lawyers and some admin staff, too. On Fridays the tavern was packed, the music loud and raunchy.

“Too quiet?” Matt half rose. “We could go somewhere else.”

“This is fine.” The truth was, she would feel uncomfortable wherever they went, because she hadn’t been in a social situation with him for a very long time.

She’d avoided Sully’s this past year in order to avoid him. In her heart she knew the reasons for his divorce had nothing to do with her. Yet, her conscience demanded that she keep her distance while he was going through the process of ending his marriage. Just knowing how she felt about him—and that her feelings had the potential to become much deeper if she let them—had been reason enough.

A server came and they placed their orders. Jane felt better with a drink in her hands. She swirled the glass and watched the ice cubes jostle in the translucent amber liquid.

Sometimes, when she was playing dangerous “what-if” games with herself, she wondered what would have happened if she and Matt had met each other much earlier—before Gillian. She was pretty sure he found her attractive. And she knew he liked her. So was she crazy to think they might have ended up together?

Yes. She had only to look at the two failed relationships in her past for her answer.

She lifted her head, glad he couldn’t possibly know what she’d been thinking about. She tried to maintain eye contact, but eventually she had to blink. The blue of his eyes was such a piercing shade. “You should be a judge. You would be impossible to lie to.”

“Is that what you’re planning to do?”

She smiled. “No. But, come on and admit it. Being alone like this. It must feel as strange to you as it does to me.”

All amusement drained from his expression. “I don’t want it to feel that way, Jane. I want us to be able to work together. To be friends.”

She swallowed. It didn’t sound like much. And yet, it was. “It’s difficult not to remember the last time we were...”

Now Matt looked positively grim. He finished her sentence for her. “The last time we were alone in a public place together?”

“I’m so sorry about that, Jane. I can’t tell you how sorry.”

His regret was deeply sincere and it only made her respect him more. It hadn’t been his fault. It hadn’t been either of their fault. On the afternoon of their fateful last lunch together, they’d been discussing business, a case that was before the court, when Gillian Gray had found them.

Jane could still picture the surprise on Matthew’s face. The gallant way he had immediately stood, looking for a chair so his wife could join them.

In those first seconds he hadn’t noticed the fury on Gillian’s face. But Jane had. Because it had been directed at her.

“What are you doing with my husband?”

Nothing, Jane had been about to say. But before she could utter a word, Gillian Gray had grabbed a goblet from the table and had hurled the white wine into Jane’s face.

Jane would never forget the shock. The intense humiliation.

“Madam.” A server had been at her elbow almost immediately, leading her to the woman’s washroom. Behind her, she’d heard Matthew speaking to his wife. Are you crazy?

Not the right thing to say. Gillian had raged at him, she’d really let him have it. At the door to the Ladies, Jane had paused, unable to stop listening until Gillian-- finally out of foul words and insane accusations--turned on her heel and marched out of the restaurant.

From across the room Jane had met Matthew’s gaze. She’d seen the abject apology in his eyes, before he’d raced after his wife.

Now she couldn’t believe she was across the table from him again. She still wasn’t sure this was wise. He might be an unmarried man in a legal sense, but he would never be ‘available’ where she was concerned.

“I should have apologized at the time,” Matthew said. “But I was afraid it would only feed the gossip at the office if anyone saw me talking to you.”

“I understand. I imagine you had enough to handle at home.” Jane had heard about Gillian’s subsequent obsessive calls to the office. If she couldn’t reach her husband, she would yell at the poor receptionist. A few weeks later, word got out that Matthew had spent the night sleeping in his office, on the couch.

Soon after came the announcement that Matthew and Gillian Gray had separated.

A year later, the divorce was final...

“Enough about the past,” Matthew said decisively. “What about now? Are you dating anyone?”

The question was thrown in as if meant very casually, but it seemed to Jane that his eyes burned intently as he waited for her response.

“Not at the moment.” She met a lot of men in her line of work, so there were always opportunities for dating. But none of the men she’d gone out with this year had held her interest. They all fell short when compared to Matt.

The truth was, she couldn’t remember any man affecting her the way Matthew did. Not even her first love when she was in university, or the man she’d almost married five years ago. She felt like a nervous teenager on a date right now, instead of a competent professional sharing a drink with a colleague.

“We haven’t discussed the case yet,” she realized.

“We didn’t come here to discuss the case.”

He stopped talking when his Blackberry buzzed loudly. It was the most obnoxious sound Jane had ever heard.

“It’s my son,” Matt said, rising from his seat as he spoke. “I have to take this. Can you give me a minute?”

“Sure.” Her lips felt stiff, but she forced a smile, averting her gaze rather than watch him walk away from the table.

She couldn’t help but think back to that other time, over a year ago. The interruption this time was far less dramatic, but it was an equally effective reminder that where Matthew Gray was concerned, she had to watch her every step.

Matthew’s Children is available in the following formats: