Book Five of the Carrigans of the Circle C Series 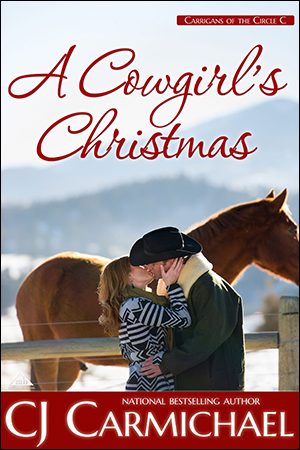 For years Callan Carrigan has been her father’s right hand man, so when her dad dies and names city slicker Court McAllister the new head of The Circle C Ranch, Callan feels betrayed on every level.

When she and her sisters find their mother’s diaries, hidden from them by their father since their mother’s accidental death 18 years ago, the shocking revelations explain a lot about their father and the provisions in his will. Feeling betrayed by both her parents, Callan seeks refuge in the local saloon, where it seems no one can reach her, until Court offers her a challenge.

If she agrees to be foreman at the Circle C for one year, he’ll deed the ranch back to her and her sisters. The deal seems too sweet at first—until Callan realizes Court has his eyes on something even more important to her than her family’s land—her heart. 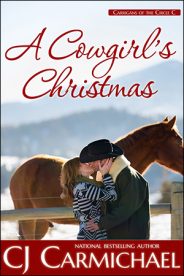 All day long Callan Carrigan had been growing more anxious and uptight. She had a really bad feeling about this meeting with the lawyer. And she felt even more nervous about meeting the mysterious guest from St. Paul, Court McAllister.

“We should put out some snacks. I have more chocolate in my car. I’ll grab a fresh box.” Her sister Sage reappeared a moment later with a large-sized, copper-colored box filled with her fruit and nut bark. After arranging the chocolate on a pretty plate, she placed it on the table in the family room, where they’d decided to hold their meeting.

Meanwhile, their older sisters, Mattie and Dani, washed grapes and put them out with cubes of cheddar and Swiss cheese.

All four sisters gravitated to the foyer, but they let Callan open the door. She understood why. This home had belonged to all of them, but her sisters were acknowledging the fact that it was Callan who had stayed with their father, Hawksley, and made the ranch her life.

Two men emerged from the dusty SUV. Callan barely glanced at the lawyer, Ren Fletcher, whom she’d known most of her life. It was the other man who drew her eyes. Almost as tall as Ren, he had a lean build and a smoothly handsome face. Despite his faded jeans and the worn leather of his boots, he looked like a man from the city to her. For one thing, his skin was too pale.

“My condolences, Callan.” Ren was the first up the porch steps. He didn’t hug her, just took her hand and squeezed her shoulder gently, before moving on to greet her sisters.

Callan was left to face Court. Up close she was struck by his beautiful blue eyes and  disarming smile. Paradoxically she felt an immediate dislike. It felt wrong, having this man she’d never met before taking part of such a personal, family gathering.

“I’m Callan.” She offered him her hand, reluctantly.

“I figured.” He was looking at her curiously, as if he had questions, either for her, or about her, she couldn’t tell. But she didn’t want to encourage further conversation. She stepped back, letting Mattie move forward into the void.

“Hi, Court, welcome to the Circle C. We’ve heard so much about you from our father. It feels strange that we’ve never met before.”

Yes, that was the right thing to say. But Callan didn’t care if she’d been rude. She just wanted this whole thing to be over, for these men to get out of her house, and leave her and her sisters alone.

It was Sage who ushered the guests to the family room, Mattie who offered coffee, and Dani who sat down with paper and a pen, in case she needed to take notes. Callan hung on the periphery, pouring herself some bourbon over a glass full of ice.

“That looks good. May I have a bourbon, too?” Court was watching her, from his seat by the fireplace.

Damn it, he was sitting in their father’s favorite leather chair. Reluctantly she dropped ice into a second glass, poured in the bourbon, and passed it to Mattie to give to Court. She dragged a chair from the kitchen so she could sit on the edge of the action.

Now she noticed Court taking in the view of the fields stretching out to the Gallatin Mountains in the west. Even that annoyed her. Then again, if he’d sat there staring at the tips of his boots, she’d probably find that aggravating as well.

“Okay, I’m going to get straight to the point, beginning with your father’s wishes regarding his end of life,” Ren said. “Callan was talking to me earlier about a funeral—”

“We covered that this afternoon,” Dani flipped back a page in her notebook. “We’ll bury dad next to mother’s marker in the family plot. Probably have a short service, with lunch to follow in the church basement.”

Ren frowned and glanced at Callan. Too late she remembered him advising her not to do any planning until he’d had a chance to talk to them. She’d forgotten to pass this on to her sisters.

“I’m afraid that isn’t what your father wanted, Dani,” Ren said, his tone gentle, but firm. “He said no service, no celebration of life, nothing like that. He just wanted—” Here Ren paused, taking a deep breath before going on. “—to be cremated and have his ashes scattered. He wanted Callan and—” Another pause. “And Court, to ride up to the foothills and scatter his ashes there.”

The room was quiet, for only a second. And then everyone was talking. Callan sank back against her chair, too stunned to do more than listen.

“But what about the rest of us?” This was Mattie, sounding affronted.

“This is too much. Even for Hawksley.” Sage, who was sitting next to Ren on the couch, put a hand on the lawyer’s arm. “Did Dad tell you why he wanted only Court and Callan to spread the ashes?”

“I’m sure he didn’t mean it as a slight or an insult. He just didn’t want any fuss. You know your father.”

“Yeah,” Dani said. Her voice made it clear this wasn’t a good thing.

Callan’s gaze slid over to Court, and found him, likewise, looking at her. There was something of an apology in his eyes, as if acknowledging the inappropriateness of her father’s request. But there was something else, too. A challenge?

“Have you even been on a horse before?” She glanced from his smooth, even complexion, to his soft, white hands.

She looked at him doubtfully. “What is it you do again?”

She raised her eyebrows and gave a slight shake of her head. Then she returned her focus to Ren. “Dad may not have wanted a funeral. But he can’t stop us from having one, if we want to.”

“That’s true,” the lawyer agreed. “I told Hawksley that, as well. But he just wanted to let you know what his wishes were.”

“I think we should respect them,” Sage said. “To a point. Callan and Court can spread half of his ashes up on the foothills. Let’s bury the rest by Mom, and have a small interment service, with just immediate family.

“Court isn’t family,” Callan was quick to point out. “Will he be invited?”

“Yes,” said Sage, Mattie and Dani, speaking over one another is their haste to be polite.

But Court took no notice. He was still looking at Callan. “If you’d rather I wasn’t present, I won’t be offended.”

His polite words, for some reason, sent her temper flaring. “Really? But then you’d be missing the point.”

“Callan!” Mattie, appalled, was quick to reassure Court that he would naturally be welcome to attend, if he chose.

“That’s very kind,” Court replied, politely. “But perhaps you should suspend your invitation until you hear the rest of what Mr. Fletcher has to say.”

In a flash everyone turned to Ren Fletcher, who made a show of straightening the papers he’d earlier removed from his briefcase. Despite his efforts to remain calm and professional, a sheen of perspiration had appeared on his forehead. Callan knew then, that her earlier anxiety had been well founded and some awful surprise was in store for them this afternoon.

“Should I get on with the provisions of the will, then?” Ren asked.

“Yes.” Callan couldn’t take the tension and stress of waiting any longer.

Find out more about the Carrigans of the Circle C Series →

A Cowgirl’s Christmas is available in the following formats: