Book Two of the Carrigans of the Circle C Series 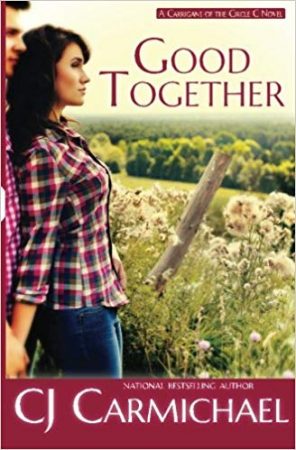 Some love stories have to begin with a falling-out-of-love story...

Mattie Carrigan‘s been helping her rodeo cowboy husband Wes Bishop run his family’s Tennessee Walking Horse operation since they were married nineteen years ago. Blessed with twin daughters who’ve recently left for college, Mattie is looking forward to this new stage in her and Wes’s life.

But when she finds a strange key in her husband’s jacket, she’s forced to admit that Wes has been quiet and distant lately. Turns out he has been keeping secrets. And he’s not the only one. Even the rancher next door, Nat Diamond—a friend Mattie could always count on in the past–seems to be holding something back from her.

Good Together is for anyone who has ever pondered what it means to be married. Or had to reinvent her life when one breaks down. It’s about having your heart broken but being strong enough to survive and love again. Try Grandma Carrigan's Cranberry Coleslaw! Get the recipe from the Extras page. 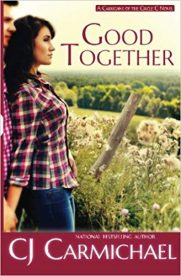 Mattie Carrigan’s subconscious figured out the problem first. She was dreaming that she and her husband Wes were in the airport. “You screwed up the reservation,” he was yelling. “We’re booked on two separate flights.”

She opened her eyes, heart racing, relieved to be in bed at their ranch in Montana and not trying desperately to get to Denver where one of their daughters had started college two months ago. They’d picked different schools, Portia and Wren,  one moving south, the other west to Seattle, which drove Mattie crazy. It was difficult enough having her children leave the nest. Couldn’t they at least go to the same place?

The night was still, dark and silent. Curtains fluttered in the breeze from the open window to her left. Wes was in the bed to her right, his naked back a wall blocking the digital time display on their alarm clock.

What time had he rolled in?

He hadn’t been there when she’d gone to bed around one a.m. So he’d driven late into the night to get here. And judging from the Head and Shoulders scent of him, even taken the time to shower.

She wanted to move closer and snuggle up against his warm, tanned skin. But something—a nasty stew of resentment, fear and hurt—stopped her.

Pushing aside her covers, Mattie slipped to the washroom down the hall. A weak nightlight—installed eighteen years ago when the twins were babies—kept her from stubbing her toes on Wes’s boots. Damn, why hadn’t he taken them off in the mudroom?

He’d been to another rodeo this weekend. She’d seen his scores posted on the Internet and they’d been low, so he wouldn’t have brought home any prize money. He hadn’t for the past six months. A sign that at thirty-nine, he was getting too old to be a rodeo cowboy.

The rosemary and bergamot infusion sticks on the back of the toilet tank couldn’t mask the odor of horse manure and cowboy sweat that permeated the pile of Wes’s clothes on the tiled floor. As she peed, she stared at his faded Wrangler jeans, and old blue and white checked shirt.

Not that long ago—definitely less than a year—Wes would have woken her up when he got home, no matter how late. They’d make love and then he’d tell her how things had gone. The broncs he’d drawn and the scores he’d made. He’d fill her in on the latest gossip—who’d been injured and who was riding high. And the romances. Someone sleeping with someone else’s wife…it happened all the time.

Mattie stared at her reflection as she washed her hands. The low light was flattering, masking the new age-freckles that had popped out this summer. Now that she was almost forty, she had to be more careful with her sunscreen, she supposed, though she’d never been one for fussing about her appearance.

Her sisters would say she relied too much on the looks she’d inherited from their mother. And she knew it was true, and that she’d been lucky. Good bones and teeth, thick hair and pretty eyes. She’d taken these assets for granted, never guessing that one day they wouldn’t be enough for her husband.

Because that had to be the reason they were drifting apart, right?

He no longer found her attractive. Maybe he’d found someone new…?

Mattie put a hand to her chest, feeling the pain as she entertained this new suspicion…that her husband had fallen for somebody new.

But then common sense prevailed. This was Wes, her husband of nineteen years. They were a team. Had been a team forever. Raising their girls. Running the ranch. They did everything together. And he valued that as much as she did.

She’d never doubted Wes in all the nineteen years of their marriage, even though they’d spent a lot of that time apart. And she wouldn’t doubt him now.

They were just moving into a new stage of life, that was the problem. Every couple went through this when their children moved away from home. For sure she and Wes were handling the change differently. She was clinging in every way possible—text messaging them many times a day, sending care packages from home—whereas Wes rarely mentioned them. Wren said he hadn’t called her once since she’d left.

Mattie hung back in the doorway, watching Wes sleep, feeling oddly distant, like she was observing a stranger. They’d met at a rodeo, when she was only eighteen. Ended up married and pregnant before either one of them was twenty. Not  a recipe for marital success.

And yet, they’d defied the odds.

Just a year ago she would have called them happy. Wes was her partner, the father of her children, her best friend. They told each other everything.

“Mat? What’s going on?” Wes lifted his head from his pillow. His dark hair all but covered his eyes.

“Worried about the kids?” His head flopped back. “Don’t. They’re fine.”

He always said that. She was the one who worried. But this time, it wasn’t about Wren and Portia. “We need to talk.”

Wes groaned. “In the morning. Get back to bed. It’s bloody freezing in here. Did you leave the window open, again?”

She loved fresh air when she slept, but Wes preferred to be toasty warm. That meant open windows in the summer, but come October when the cold winds blew off the Mission Mountains, they had to be closed.

She pushed aside the curtains, then cranked the lever until the window was flush with the wall. Quietly she crept back under the covers, loving the coolness of the sheets on her side of the bed. On her back, she stared at the ceiling, waiting to see if Wes would turn and pull her into his arms.

Come morning, Mattie was up before dawn, dressed for work in old jeans and a flannel shirt. She stood by the bedroom window as she fastened her buttons. In the faint light she could see mist hanging low to the ground and clinging to the Mission mountains. It would be cold outside. She slipped an extra pair of socks on her feet.

Wes was still sleeping and she closed the door after herself so he wouldn’t be disturbed.

He generally slept late after a rodeo. She never did. Nothing happened in her day until the horses had been fed. Wes insisted this was ridiculous because they had hired men to do the morning chores. Well, these days it was only Jake. But Mattie had been raised on a ranch and the rules on the Circle C had been inviolate. No one eats before the animals.

Mattie brought up the twins the same way. From a young age, no matter the weather, she’d bundled them up and taken them to the stables with her. They’d adored trailing the feed cart as she dole out rations, petting the barn cats, and jumping in the wood chips that were used for bedding. But when they hit their teen years, suddenly Wren became a night-hawk and couldn’t drag herself out of bed any earlier than fifteen minutes before the school bus arrived, while Portia’s new hair and makeup routine required at least an hour of prep time , rendering her unavailable for anything as prosaic as ranch chores.

Mattie missed all of this—the early childhood years and the stormy teenaged years—with an intensity that made her chest ache. Something vital had been scooped out of her body the day she and Wes drove the twins to the Missoula airport.  Was she always going to feel this hollow?

After filling a to-go mug with coffee that had been programed the night before to brew fresh at six a.m., Mattie almost tripped on the sleeve of a jacket that had been tossed toward a stool—and only partially hit its target. The light navy windbreaker was Wes’s. She bent over to pick it up, wrinkling her nose at the scent of tobacco smoke—he must have worn it into a bar. Intending to hang it on one of the pegs in the mud room, she paused when she noticed a key had fallen from one of the pockets.

She picked it up, frowning because their house keys were silver-colored, not brass. Besides, Wes kept all his keys on a ring. So what was this for?

She placed it on the butcher block island and went to put her boots on.

Find out more about the Carrigans of the Circle C Series →

Good Together is available in the following formats: